Tonight, I knew, was the night. No sidetracking for Scottie. No beer at the old hangout, to get all his ducks—or ducklings—in a row.

haunted me. That elfin grin, he had, like a sexy leprechaun. Like he was the pot o’gold at the end of the rainbow, instead of a kiddie-loving creep.

Memories of my baby . . . when she was just a baby: innocent brown eyes, spit bubbling in her tiny mouth. Counting on me to protect her . . .

My neck hurt. Without taking my eyes off the door, I shifted the pillows behind me.
A lollipop, he’d given Sofia. A little one, ‘cos she was so little, then.

The back door was unlocked. I bet that was his way. Sneaking in through the back…
I’d never had a cat. But that . . . sound . . . was like paws creeping up carpeted stairs.

Then there he was. Lollipop, and all.

Smirking, he opened his arms. He was that cool, for rising from the dead.

The lollipop shifted, and I smelled cherry. I cringed, as he sat on the bed.

“‘Jesus wept,’” he quoted. “For his friend Lazarus. So he brought him back.”
The balls, I thought. The sight of him, that candy smell, made me almost puke.

“At my mom’s,” I said. “Down Keansburg. She goes to my old school. Made honors last semester.”
All bullshit. Sofia hated school, and he knew it.
'
“Not my girl.”

God, I hated him. Why had I even married him? Half the time, he couldn’t get it up.

Scottie didn’t hear it. “She knew I wasn’t dead. All this time. It was all her idea, to say I was.”
Again, soft cat paws coming up the stairs.

“Sofia.” It came out so tenderly, I just stared.

I wanted to kill him. Crack him right in the lollipop, so it punctured his throat. Stop that laugh forever. The strength of a sledgehammer was needed, for that.

​Once Scottie turned around.

Cindy Rosmus is a Jersey girl who looks like a Mob Wife and talks like Anybody’s from West Side Story. She hates shopping, shoes, and chick lit. She writes noir/hardboiled/noir/horror. She’s been published in the usual places, such as Hardboiled; A Twist of Noir; Beat to a Pulp; Pulp Metal; Thrillers, Killers, n’ Chillers; Mysterical-E; and Powder Burn Flash. Her stories have also appeared in the anthologies Hardboiled, Pulp Ink 2, and Kwik Krimes. She is the editor of the ezine, Yellow Mama and has published five collections of short stories. 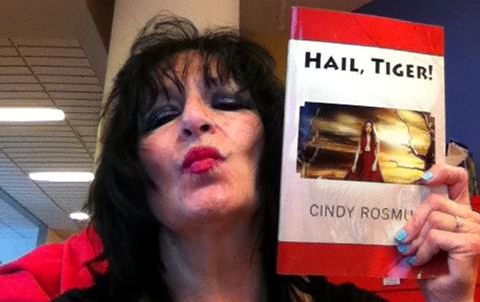 My memory of Bill:

A Yellow Mama veteran, “AJ” was both a wise and dear friend and mentor to so many of us. He had nicknamed me the “goddess of noir.” But this kind, knowledgeable man was himself “a noir god,” the kind of writer I long to be.

The new era of pulp