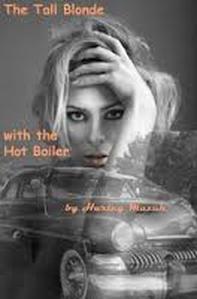 The first short story I wrote featuring Frank Swiver was, "The Tall Blonde with the Hot Boiler", published in Ellery Queen Mystery Magazine in the January 2011 issue. I was as surprised as anyone to get a sale on my first try. So I wrote, "Ice", which EQMM published in September-October 2012. My third story didn't sell, so I posted it on my own for Amazon Kindle--"The Girls from Nanking" The next story was "The Road Les Traveled" (EQMM, August 2013.) Then you, Dead Guns Press, picked up my novelette, The Drowned Phoenician Vintner, in 2014. And I put out "Joe's Last Scratch", packaged with "Ice", for Kindle. Those two went together in time and in characters, an interesting thing that happens with series private eyes.  You can find most of my work on Amazon.

I've also written two novels featuring Frank Swiver, and I'm happy to announce that Driven Press just offered in January to publish the first one, White with Fish, Red with Murder. I'm thrilled about that naturally, but I'm also happy that a lot of the background of my wino pacifist detective, his loves and background, that I occasionally reference in the short stories, will soon be in print and become clear to readers.

DGP: Tell us a bit about Swiver.

HM: Frank was born in 1912, and raised in a very blue collar, union-oriented, middle-class suburban family in Mill Valley, California. He went to college at Cal Berkeley, where he met Max Rabinowitz, a red (Communist Party USA), who became a close friend. In 1933, college grad Frank was looking for a teaching job and stopped in John's Grill on Ellis St. in San Francisco for a beer. He fell into a passionate relationship with Cicilia Ricci a waitress there, which ended when she dumped him and married a rich ex-bootlegger. Frank went into a tailspin of heavy drinking, until his pal Max, trying to save him, took Frank to a political meeting which resulted in the two of them joining the Abe Lincoln brigade and going off to Spain to fight in the Spanish Civil War. Max lost an eye to a shrapnel wound. Frank saved his life but fell victim to what we'd now call PTSD. At any rate, the only way he could cope with the bad dreams after he left Spain was by professing non-violence.

DGP: Do you have ideas for any other Swiver novels?

HM: The first novel, White with Fish . . . set in 1948, deals with "the Thursby Case," during which Frank reunites with Cicilia, pissing off his secretary Vera Peregrino. It ends in true noir fashion with Cici dead and Frank estranged from Vera.

The second novel, Last Puffs, is about Frank and Max, their adventures in Spain, and their encounter ten years after they leave there with the hot-blooded Spanish freedom-fighter, Amanda, whom they both loved and had thought was dead.

I just started writing a third book last month. It opens in November 1950, with Frank, confident that he's restored Vera's trust in him, planning to ask her to marry him. The mystery is a murder at the Carmel Mission, for which Frank's brother, a priest, is arrested. Clement Swiver heard the confession of the murderer, but can't break the seal of the confessional. The cops don't really care, as long as they have a fall guy, and Clem fits the bill. So Father Swiver needs brother Frank to find the real murderer before he steps off for a killing he didn't commit. Well, Raymond Chandler believed that the detective hero could never find love and live happily ever after. But on the other hand a series might come to an end, so, we'll see what happens.

DGP: Genres...we know you can write some mean old time hardboiled fiction.  Is there any other genre you want to write in but haven't done it yet?

HM: Good question. My real love is pulp fiction and noir. I've been pitching my stories to non-genre magazines and journals (without success), so you might say it's in the back of my mind that I want to write "literary" shit.  But deep inside I suspect even if I do crossover, there will still be a mystery, very likely a murder, at the heart of each story. 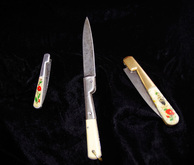 HM: Private eye Frank Swiver and I carry Corsican Vendetta knives. They're of questionable value for a knife fight, but a good assassin's tool. They're also nastier than the traditional pocket knife. Frank shot several fascists at close range during the Spanish Civil War. It was for a good cause, but put him off violence. He has an office gun, and carries a Walther PP in his car, but tries to avoid using them.

DGP: I've noticed that he uses brain over brawn. Can you give us some background on Swiver? Especially the Spanish Civil War gig?

HM: Frank was in a downward spiral of drinking after losing a woman. His college (Berkeley) friend, Max Rabinowitz, a serious Red, took him to a political meeting and the two signed up to fight with the Abe Lincoln Brigade in Spain. Max lost an eye but Frank saved his life. They were helped by some Republican peasants, but stopped on the road by a Fascist patrol--the last three men Frank killed.

DGP: Frank strikes me as one of the forerunners of the Beatnik movement for some reason. He’s a pacifist, an educated person, has a high class taste for a good running Ferrari, good wine, and firm broads. Why would he take on being a PI?

HM: After coming back from Spain, he had bad dreams about the killing. He was a wino, and unemployed. He went to a Dorothy Day house for a free meal and a place to sleep, and ended up embracing Dorothy Day's Roman Catholic philosophy of non-violence. Then he was a conscientious objector during World War II. After the war, all the jobs he sought went to veterans, so he went into business for himself. An odd choice perhaps, but the only option he found open.

DGP: Why Blondes over Brunettes or Redheads?

HM: That varies with the story, John. Frank's true love who left him in '34, started him on that downward spiral, was a petite, very dark-haired woman. You know about some of the blondes--Leni Richter and Vera. I'm trying to sell a story now, "Pearl's Valley", in which he takes up with a redhead.

DGP: Drowned, Iced, Blonde with the hot Boiler and Joe’s Last Scratch…all Frank Swiver novels. Do you think there’s ever an end for Swiver and his PI career?

HM: I thought there was when I started this. I thought perhaps three novels and then out. (I've written two, still unpublished.) In the third Frank is thinking about trying to marry his friend, Vera Peregrino, and if he does, that could spell the end of the series.

This is a bit of a tangent, but I have another short story now that I'm trying to peddle. In that story Frank travels to Peru on a case and ends up smuggling some cocaine. Some folks who read it thought it was too despicable for my series character, so I started a new private eye, Igor Otxoa, a Basque-American, with no particular scruples about coke. So there are different ways for a series character to end.

DGP: Cocaine was popular back even in those days. That to me, after reading ‘Drowned’, showed me that Frank is a man of many hats and flavors, impulsive even, but it seems to me that he is experiencing life to the fullest. A fair assessment?

HM: Yeah. Impulsive. living life to the fullest he can afford. You know, Dashiell Hammett, Raymond Chandler, and the American P.I. tradition are models for my writing, but Ian Fleming and James Bond were models for Frank. Always chasing the dames, drinking way too much.

DGP: And that was my next question. Your reading influences. They’ve got to be plenty to create a character with this kind of depth. Most writers rely on their characters being akin to something from Mickey Spillane’s character Mike Hammer, or CJ Henderson’s Jack Hagee. Your’s on the other hand, deals with very bad people but has to use his brain rather than brawn. Ian Fleming was a great writer and his books are so much better and far different than Hollywood depicts. Who are your reading influences?

HM: In the vein we're talking about, John, I'm also very fond of James M. Cain for his fast-moving, clear prose, his noir sensibilities, and his willingness to write about very flawed characters. He was one of the best. I also admire Edgar Allan Poe. I was an English major in college, (Frank was a history major.) I like and admire Hemingway, Graham Greene, Somerset Maugham, F. Scott Fitzgerald and I try to learn from, and steal from all of them.

HM: I loved "Of Mice and Men." I've had trouble getting anywhere with some of his longer works. Not sure why. He wrote well.

DGP: Films…you got to have a count on the best films you dig on.  I suspect old time stuff with maybe Steve McQueen or Edward G. Robinson, maybe some Humphrey Bogart.

HM: I recently watched and read The Big Sleep for a class I was taking on detective fiction. The book is great and the movie makes my top 10 list too. I'm also fond of Casablanca, The Godfather, Apocalypse Now, The Maltese Falcon, Dr. Zhivago, Bridge on the River Kwai, Goldfinger, and From Russia with Love, most Hitchcock films--especially Vertigo and North by Northwest. And Silence of the Lambs was a storytelling masterpiece.

This morning while I was exercising, I was watching Blade Runner. There's another noir masterpiece.

DGP: Bladerunner was an exceptional film. One of the few Sci-Fi films from the eighties to earn a respected following. Let’s move on with ‘Drowned’. Swiver has this gift for wine tasting. He’s hired out by a rare wine collector to help verify a possible purchase of some rare wines. Swiver and Vera discover a murder and then mayhem follows, especially with Helene Richter. How did you come up with such a great story-line?

HM: I'm glad you liked that story, John. Sometimes, I have some scenes that I want to try to write, some ideas for characters, and I start writing and try to let the characters come alive and lead the way. In this particular case, I was thinking of a northern European blonde who was a bit of an exhibitionist and a fitness buff. Transplant her to sunny California. I have an interest in and a taste for "old vine" California wines. And I was reading about a police case involving people who were selling counterfeit wines at auctions. I just tried to put things together into a story. 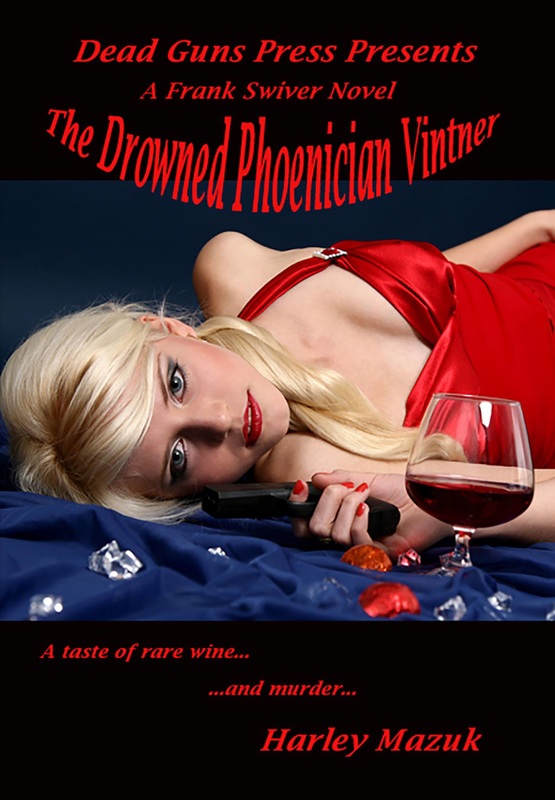 Back
The new era of pulp